Discussing the application of legal liability limits to varying types of tenancies.

In the face of a fire that results in damage to multiple units of a commercial building, it can be difficult for insurers to determine the scope and extent of coverage available under a commercial general liability policy. Indeed, one must think critically about how the policy limits will interact, particularly where the claim involves property damage, damage to contents, and different types of tenancies.

Under the “fire damage legal liability” exception to the exclusions contained in Coverage A of the current standard commercial general liability (“CGL”) ISO policy, coverage is added back for fire damage sustained to a premises rented to a covered insured where that damage was caused by an insured’s negligence.1 This coverage is subject to a separate sublimit titled “Damage to Premises Rented to You,” which “establishes the maximum that will be paid for loss arising out of any one fire that is covered as a result of the fire damage exception [. . . ].”2 Both the coverage grant and the limits of liability extend to property damage only. Damage to contents is not included under this sublimit, but may be available under the general aggregate limit.3 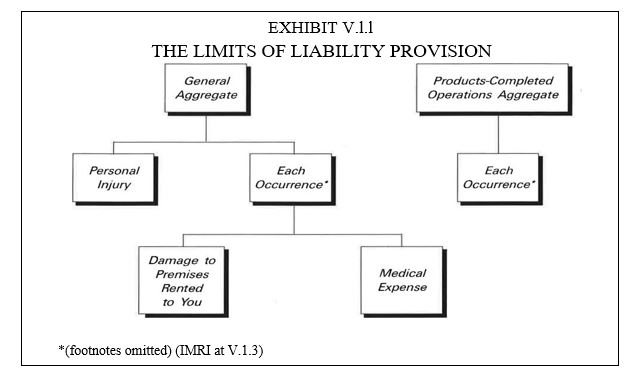 Application of limits can become more complex. For example, consider a claim involving fire-damaged units leased to both (1) individual tenants, and (2) social services organizations who then sublease the units to individuals in need of housing. Claims involving “property damage” due to fire caused by the negligence of a tenant placed by a social services organization may trigger yet another sublimit specific to this particular style of tenancy which is likely to be included by way of endorsement. The “Damage to Premises Rented to You” limit is instructive to how limits may apply in that type of scenario.

Any additional sublimit is likely to encompass only the “property damage” caused by the placed-tenant and to the unit sublet specifically to that tenant. In other words, where a claim involves damage to (1) units sublet to placed-tenants and (2) to units leased to individual tenants, the property damage sustained to the space sublet to the placed-tenants is likely to be subject to a separate sublimit, while the property damage sustained to the space leased by individual tenants would be subject to the remaining per occurrence or aggregate limit.

As fire legal liability policy language continues to evolve to address more complex tenancies, the application of limits will require one to consider more and more coverage questions. The general principles set forth above may assist those navigating the increasingly complex world of fire damage legal liability claims.

1 See Woodward et al, “Commercial Liability Insurance” at V.D.230-31 (International Risk Management Institute, Inc., Vol. I, 2010) [hereinafter, “IRMI”]. The fire damage legal liability coverage enhancement, together with the sublimit, was clarified in the broad form comprehensive general liability endorsement in 1976 and again in 1986. Id. at IV.D.3 to IV.E.5. Many other coverage issues may be triggered in making this determination. Note that under the ISO form, coverage applies only if the insured is legally liable for the fire damage because of negligence; the contractual liability exclusion is not affected by this provision. Id. at V.D.230-31.