Plaintiffs announced today that an additional settlement has been reached in In re Automotive Parts Antitrust Litigation.

Total settlements in the end-payor case, where class members include businesses and consumers who purchased or leased new automobiles, have now reached more than $288 million. Although captioned as a single MDL, the case is unprecedented in scope and complexity—it currently encompasses 36 separate sets of cases and approximately 150 separate defendants, each involving different auto parts, different conspirators, and different timelines.

Hollis Salzman, co-lead counsel for the end-payor plaintiffs and co-chair of Robins Kaplan LLP’s Antitrust and Trade Regulation Practice, represents a group of more than 50 individuals who purchased or leased new automobiles containing the auto parts at issue in the litigation.

"We are very proud of this latest settlement, which increases the amount of money available to businesses and consumers who have been overcharged as a result of the massive conspiracy we allege in our lawsuit," said Salzman. "We will continue to aggressively try our case against the remaining non-settling defendants until all of those harmed by this conspiracy are justly compensated."

Total recoveries to date are reflected in the below infographic. 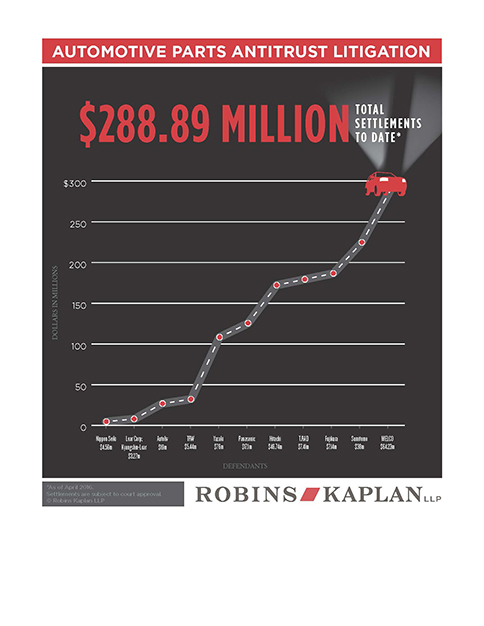 The litigation involves allegations that an international cartel engaged in a long-running price-fixing conspiracy in the automotive parts industry, which, according to former U.S. Attorney General Eric Holder, affected more than $5 billion in automobile parts sold to U.S. car manufacturers. To date, 39 different companies and 58 executives have been charged in the Department of Justice’s parallel criminal antitrust investigation of the industry. Each of the 39 companies either has pleaded guilty or has agreed to plead guilty, and altogether they have agreed to pay more than $2.6 billion in criminal fines.