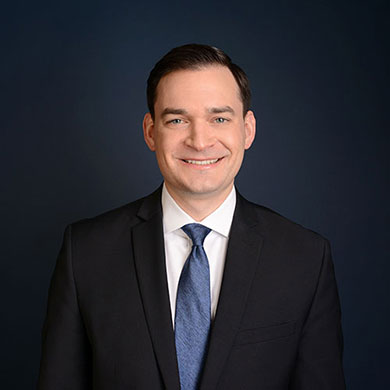 Bryan Mechell is a trial lawyer and registered patent attorney with experience in complex intellectual property litigation. Bryan focuses his practice on new and cutting-edge technologies in order to help large companies, small businesses, and inventors assess and protect the value of their IP. He regularly represents clients as both plaintiffs and defendants in various phases of litigation—including trial proceedings conducted by the Patent Trial and Appeal Board—and enjoys helping clients effectively navigate complex and technical legal issues in order to meet their business goals.

Drawing on his background in computer science and physics, Bryan regularly represents emerging and established businesses involved in technology and software license disputes and helps them develop methods for auditing, managing, and enforcing license compliance. He is currently trial counsel representing 4DD Holdings, LLC in a high-profile case against the U.S. Government for alleged violation of a copyright license agreement, with damages in the billions of dollars. He recently reached a confidential pre-suit settlement on behalf of a of a healthcare database software developer in a copyright infringement dispute with a software licensee and continues to represent the developer in follow-on license enforcement efforts. Bryan has also represented companies defending against claims including patent infringement, copyright infringement, and breach of technology license agreement.

Because of his in-depth experience and knowledge of the ever-changing IP litigation landscape, Bryan is a trusted advisor to his clients in the courtroom and the boardroom. He advises companies of all sizes on the IP-related risks and opportunities they face as they bring their innovation to market by helping them manage their technology and software licenses and map out asset protection strategies. He is skilled at helping both licensees and licensors protect their IP assets, improve their technology agreements, and develop strong bargaining positions in technology-related negotiations.

Bryan has advised clients in a wide variety of technical fields, including:

Bryan has completed coursework in quantum physics, advanced mathematics, chemistry, and computer science, and is registered to practice before the United States Patent and Trademark Office.

Bryan is committed to pro bono representation and has obtained asylum for Tibetan monks who have been imprisoned and repeatedly tortured after demonstrating against the government.

In the community, Bryan sits on the Executive Board of Directors of the Minnesota Chorale - the Principal Chorus of the Minnesota Orchestra and one of the foremost professional choruses in the United States - where he supports the Chorale's mission of fostering and deepening community through its outreach initiatives and educational activities. Bryan is also an active tenor soloist, recently volunteering his time as the lead role in a seven-night stage production of "Joseph and the Amazing Technicolor Dreamcoat" that raised funds for individuals with developmental disabilities.